Presented by The J at 1900 Building, Mission Woods KS 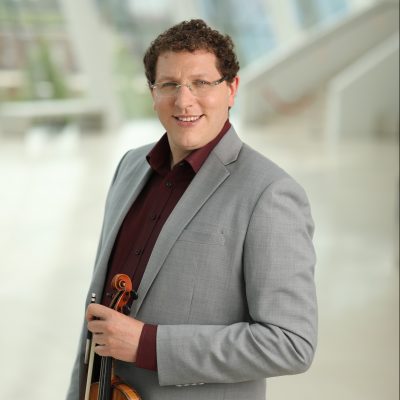 THE J AND SHIR AMI ARE PROUD TO PRESENT: A FESTIVE EVENING OF AMERICAN JEWISH CHAMBER MUSIC

THE J AND SHIR AMI ARE PROUD TO PRESENT:
A FESTIVE EVENING OF AMERICAN JEWISH CHAMBER MUSIC

Violinist Noah Geller has performed extensively throughout the United States and abroad. At the invitation of Music Director Michael Stern, Geller became the Kansas City Symphony concertmaster in 2012. He has since appeared frequently as soloist with the Symphony. He made his solo recording debut on the

THE J AND SHIR AMI ARE PROUD TO PRESENT:
A FESTIVE EVENING OF AMERICAN JEWISH CHAMBER MUSIC

Violinist Noah Geller has performed extensively throughout the United States and abroad. At the invitation of Music Director Michael Stern, Geller became the Kansas City Symphony concertmaster in 2012. He has since appeared frequently as soloist with the Symphony. He made his solo recording debut on the Kansas City Symphony’s recent release with Reference Recordings featuring music by Saint-Saëns. In addition to his activities at the Symphony, Geller is an enthusiastic music educator. Upon his arrival in Kansas City, he was appointed adjunct associate professor of violin at the University of Missouri-Kansas City Conservatory of Music and Dance. Geller began his professional career in the ﬁrst violin section of the Philadelphia Orchestra in 2007 while still pursuing his master’s degree. He served as acting assistant concertmaster of the Philadelphia Orchestra for the 2010 and 2011 seasons. Geller also has performed as guest concertmaster with the orchestras of Pittsburgh, Houston and Beijing (China National Symphony). In addition to his orchestral activities, Geller appears regularly with the dynamic, spirited and conductorless East Coast Chamber Orchestra. An active chamber musician, Geller has performed at the Marlboro, Kingston, Saratoga, Heartland and Skaneateles festivals, and he has appeared on the Lyon and Healy (Chicago), Philadelphia Museum of Art, and Lyric Chamber Music Society (New York) series, among others. He is an original member of Shir Ami, an ensemble dedicated to the music of composers whose lives were adversely affected by the Holocaust. Geller has organized and presented concerts by Shir Ami for the Kansas City community, garnering remarkable support and enthusiasm. Geller grew up in the Chicago area, studying privately with Jennifer Cappelli. He received his bachelor’s and master’s degrees from The Juilliard School where he studied with Hyo Kang, Donald Weilerstein and Cho-Liang Lin. Geller currently lives in Kansas City with his wife, percussionist Mari Yoshinaga, and their dog Monkey. He performs on a violin made by Andreas Postacchini c. 1840. (bio via KC Symphony)

Shir Ami was inspired initially by the story of a great musician whose artistry saved him from certain death.

As a child, I read in the Philadelphia Inquirer the story of David Arben, then associate concertmaster of the Philadelphia Orchestra, who had, on the occasion of his last tour before retiring, visited his native Poland for the first time since the war.  Arben’s childhood struggle included separation from his parents, life in the ghetto and finally deportation to the concentration camp in Flossenberg, Germany.  The Jewish commandant appointed to manage Arben’s company saw that the young musician had a violin with him, and Arben was then employed to entertain at Nazi officers’ functions.

One night he was awakened, along with his entire barracks, and ordered into the woods to dig a ditch and prepare to be executed. As the man to his side fell dead into that ditch, the commandant realized that Arben, the Jewish fiddler, was next in line, and saved his life.

When the war ended, young David Arben was left alone, with no family, and after finding his way to study in Munich, eventually played for Efrem Zimbalist in a masterclass at the Salzburg Mozarteum, which led to Arben’s invitation to attend the Curtis Institute of Music in Philadelphia and ultimately to a long and distinguished musical career. When Arben returned to Poland on that orchestra tour, he gave a recital at the synagogue he had attended as a child, which was miraculously still standing.

This dramatic story has remained with me always and Mr. Arben has been a mentor to me since we later collaborated in Puerto Rico on a performance of the Schubert Cello Quintet.

Around the same time, my dear friend, Nancy Rubenstein, shared with me her love and knowledge of this repertoire, which finally coalesced into the present ensemble; we gave our first performance on Yom Hashoah, 2007, at the temple my family and I attend in Newtown, PA, Shir Ami Bucks County Jewish Congregation.

After the excitement and interest generated by that debut concert, our fledgling ensemble realized we needed a name and were delighted when my own clergy, Rabbi Eliot Strom and Cantor Mark Elson, graciously agreed to grant us the name of our congregation:  Shir Ami – Song of Our People.

All seating is General Admission and first come first serve.