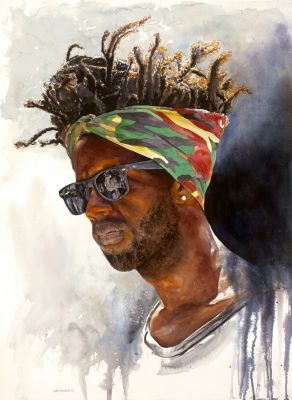 It  has been proclaimed  that figurative artwork has found its way from the periphery back to the center of the art world.  We would disagree with this notion that figurative artwork went to the periphery of the art world. The Hilliard Gallery has been a leading voice for over twenty-five years for figurative work, and in the last 15 years by hosting  our annual contemporary figurative art show, “The Figure in Contemporary Art.”  We maintain that it has always remained at the center or core of the artists and the art world.  So, where do we see figurative art being today, and more importantly, what place does the human figure hold in Contemporary Art? This national juried show will continue to explore these questions.        The schism between abstract and figure art was possibly one of the most important periods, and the most influential and productive time in Art History.  There are works in which the figures represent political views and stand to represent the rebellious citizens. Later on we see the work of Jean Michel Basquiat through who we have come to understand the distorted figure as the inner world of the artist, depicted in his expressive way, suggesting inner energy and the struggle. We have come to understand figuration as a courier of certain values, codes, and as a symbol of the artist themselves. But what can be said about  figure art in the Contemporary Art world today?  Today the current landscape of contemporary figurative work is robust due to the way artists are portraying the  human figure in response to the salient topics and issues of the 21st century.  These topics are centered over what it means to be a human in one kind of body or another. It is undeniable that figurative works still have a stronghold in our contemporary sphere.         Contemporary Figurative art has teamed up with other art genres such as abstract, cubist and minimalist art.  With the notion that all is open for grabs, and that no narrative is safe from destruction, we see a very eclectic approach to the figure in contemporary art.  Artist Francis Bacon always considered his work to exist in this middle ground, somewhere between figuration art and abstraction.  The blending of the two dominating forms of expression, abstraction, and figuration art, is not all that we see happening today in the art of the figure.  In recent years, several contemporary painters have begun reaching back to the roots of modern art to find new modes of expression. Artist seem to use, with much more freedom, figure art, and other recognizable forms, with elements of abstraction, that when comprised together provide for an ambiguous narrative. There is a collective notion that figuration art today contains elements of abstraction and that it also follows no rules at all.  Some artists submit the image of the body to the demands of the painting itself rather than conceive of it as something that already exists in itself and that the painting has to accommodate by way of codified rules, evident by the eclectic nature of the art in this exhibition.
This national exhibition examines the use of the human form as a tool to express varied content and contemporary issues. These paintings depict their feelings, sentiments, and a sense of belonging to a larger community in the contemporary world, while capturing the impulses behind the range of figuration presented by today’s contemporary artists.    PARTICIPATING ARTISTS  Marisa Andropolis, Sally Brown , Jeanne Ciravolo, Benjamin Conley, Misty Desper,  Mark Engel, Fmax Fearing, Ana Gadish-Linares, Malcolm Glass,  Krista Grecco, Dave Hanson, Shabana Kauser, Ron Ladzinski, Chalda Maloff, Erika Meriaux, Gary Warren Niebuhr, Pierre Riche,  Holly Scoggins, Eric Stampfli, Minnie Valero,  Ethan Wright,  Tony Armendariz, Karrie Baxley, Wes Casey, Michael Coleman, Bryon Draper,  Ben Erlandson, Tarin Eicher, Gianluca Giarrizzo, Mark Gould, Carolyn Greener, Debra Hill, Carol Kiefer-Johnson, Lacey Swift, Lisa Matrundola, Trey Morgan, Jim Norris, Chinemerem Omeh, Lorna Ritz, SameSource, Barbara Simcoe,  Natalie Sullivan, Michael Wilson, Xmasviper