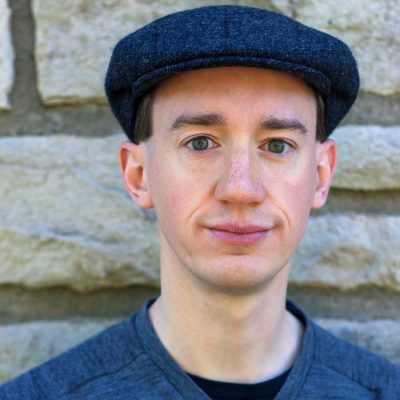 AJ Harbison (born 1985) is a composer and singer/songwriter living with his lovely wife and young daughter in Kansas City, Missouri. His music lives at the intersection of concert music and vernacular music, each bringing unique vitality to the other in a language both adventurous and accessible. He often integrates harmonies and rhythms from pop music with theory, instrumentation, and performance techniques from concert music. While drawing forms and structure from both, his work searches for beauty in brokenness in the space between the already and the not yet. He has composed for a wide variety of genres and contexts, including concert music, musical theatre, film, and guitar/vocal pop songs for his CD Songs From My Shelf, which he also recorded and produced. Among his recent concert music works are Cantata for saxophone quartet, which employs a form inspired by the cantatas of Bach but uses modern techniques to explore the variety of tone colors and instrumental combinations available to the ensemble; Fanfare for the Common Kid for beginning string orchestra, commissioned by FuseBox New Music for the students of Harmony Project KC; and The Footsteps Die Out For Ever for narrator, drum set and orchestra, based on the last chapter of A Tale of Two Cities by Charles Dickens. AJ has studied with Leonard Rhodes, Pamela Madsen, Lloyd Rodgers, Ken Walicki, Chen Yi, Paul Rudy, and James Mobberley, and holds degrees in composition from California State University, Fullerton (BM) and the University of Missouri-Kansas City (MM).