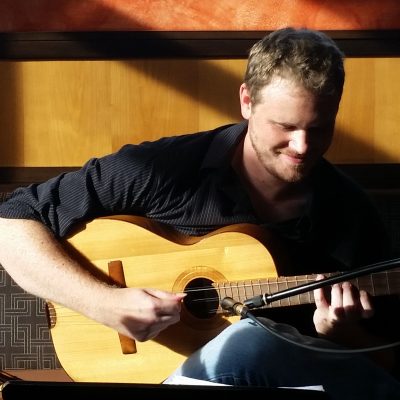 Michael McClintock graduated from the University of Missouri Kansas City Music Conservatory with a Bachelor of Music in classical guitar performance in 2006. At the conservatory Michael studied under the classical guitarist Douglas Niedt.

His first professional musical project was with the Manos Rojas School of Flamenco in Kansas City where he played with, among others, Beau Bledsoe. Bledsoe introduced Michael to the nuances of Flamenco and Argentinean Tango. In 2007 Michael, with dancer Aimee Hughes and guitarist Jarrod Stephenson, formed an independent Flamenco group, Alma Flamenca, which played in the Kansas City area and toured throughout the Midwest.

In 2010 Michael and Jordan Shipley created Mistura Fina in order to perform authentic Brazilian folk and jazz music. Their work had struck a chord in the Kansas City Jazz scene and their Latin Jazz sound resonated with a wide array of groups. Beside McClintock and Shipley, Mistura Fina has included Kansas City jazz masters such as Shay Estes, Rod Fleeman, Matt Otto, and Stan Kessler. This experience also gave Michael the chance to be part of the Brazilian project directed by Shay Eastes “Arara Azul.”

In 2012 Michael alongside fellow guitarist Jarrod Stephenson and percussionist John Currey formed the group Broken String which artfully uses traditional North American Jazz, Spanish Flamenco, and Brazilian music among other styles to create a wide and authentic exploration of some of the world’s more intriguing music.

Michael served on the Board of Directors of the Kansas City Jazz Society in 2013 and saw his role there as being to serve as a bridge between the established jazz community and a younger more experimental jazz aficionado.

In 2013 Michael visited Cuba for the first time and fell in love with the Cuban music and its native instrument the Cuban Tres. He has been studying the instrument since then in his several visits to the island with 2 of the most important treseros now days: Doctor Efrain Amador, professor at the Instituto Superior de Arte in Havana, and with Cesar Echevarria (El lento), who has been part of the most prestigious traditional bands in Cuba.

Since 2013 Michael has been part of Ensemble Iberica, a nonprofit performing arts organization directed by Beau Bledsoe, performing the music of Ibéria (Spain and Portugal) and the colonial Americas. The Ensemble features extraordinary musicians from classical, jazz and folk music traditions both locally and from around the world. It was with Ensemble Iberica where Michael started to introduce for the first time the Cuban Tres in different styles of music such as Jazz, Fado, Tango, Bossa Nova, Ginga, Flamenco.

In 2016, Michael and his wife Dálida T. Pupo Barrios, decided to create their cultural project “Cubanisms”, trying to spread the Cuban culture in the USA. The project includes travel guided services to Cuba and Michael’s music ensemble performing Cuban-Latin songs with arrangements made by Michael in his Cuban inspirational style. Cubanisms has released its debut album “Acento Cubano” (Cuban accent) in October 2017.

In 2018, Michael was invited to participate in the Jazz Plaza International Festival in Havana, Cuba, sharing stage with Janio Abreu & Aire D’ Concierto, Victor Goines and Ivan “Melon” Lewis. As part of this event the Cuban record label Bismusic will be releasing a DVD. Michael was accompanying jazz compositions in Changui and Nengón arrangements (Cuban rhythms) with his Cuban tres.