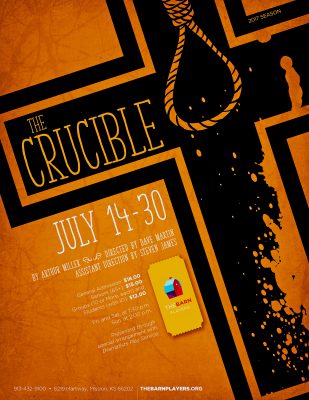 This July the Barn Players bring playwright Arthur Miller’s Tony Award winning dramatic classic “The Crucible” to their stage. The setting: Salem, Massachusetts, 1692. When married farmer John Proctor breaks off an affair, his scorned mistress leads her girlfriends in a pagan ritual against his wife. When the rite is discovered, accusations fly. Proctor’s innocent wife is brought to trial and John must now attempt to defend her and avoid being accused of sorcery himself. What terrifying outcome might await them if he fails her? This unforgettable drama of gripping American history also serves as a timely reflection upon our own contemporary society.

“We view this story as timeless,” says director David Martin. “While the actual events took place in the late 1600’s and the play was written with the shadow of 1950‘s McCarthyism over it, you don’t have to look hard to find persecution, politically motivated accusations, and public character assassination in our world. Our hope is that this show serves as a reminder of the consequences of such actions, while also taking audiences on a voyeuristic ride through one of our country’s most historic black marks.”