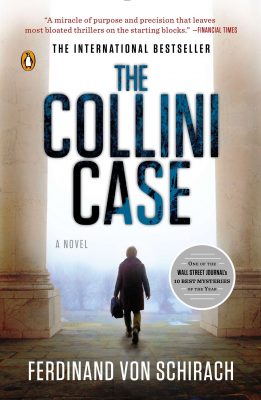 The Goethe Book Club, hosted by Chris Walker, meets once a month to discuss works from contemporary German-speaking authors and explore experiences with the text. Each selection can be read in its English translation or original German; the discussion will be in English.

No registration required, simply pick up the book from our Pop Up Library. Copies can also be obtained online via most major retailers in hard copy or digital format.

His first novel, Ferdinand von Schirach’s The Collini Case describes the shockingly mild way in which German post-war justice dealt with the Nazi perpetrators. Following its publication, an independent commission set up by the German Federal Minister of Justice to deal with aspects of Germany’s Nazi past used the novel for reference, among other things. In some German states, The Collini Case has become school reading.