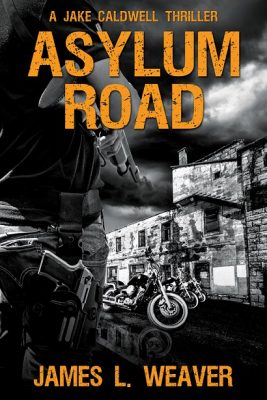 Join Olathe, KS author James Weaver for beverages, a bite to eat and a discussion of his most recent novel, “Asylum Road,” the fourth installment in his award-winning Jake Caldwell series.

Paperback copies will be available for purchase at Afterword before, during and after the event.

Oh, and it’s Happy Hour all day on Sundays.

ABOUT THE AUTHOR: James L Weaver is the Kansas City author of the Jake Caldwell series from Lakewater Press featuring:

James makes his home in Olathe, Kansas with his wife and two
children. His previous publishing credits include a six-part story called “The Nuts” and his 5-star rated debut novel “Jack & Diane”, which has been optioned. His limited free time is spent writing into the wee hours of the morning, working out, golfing, running, and binge-watching Netflix, Amazon Prime or Hulu – he’s not picky.

ABOUT THE BOOK: A vengeful drug lord. A vicious biker gang. A beautiful victim of a trafficking ring. Nearly two years ago, former mafia leg-breaker Jake Caldwell had ruthless drug king Shane Langston staring down the wrong end of a pistol. But instead of pulling the trigger, Jake let the law handle it. Now Langston’s escaped from prison and is hell bent on killing the men who put him there…and their families.

With the people he loves the most in danger, Jake knows what needs to be done – and this time he won’t hesitate.