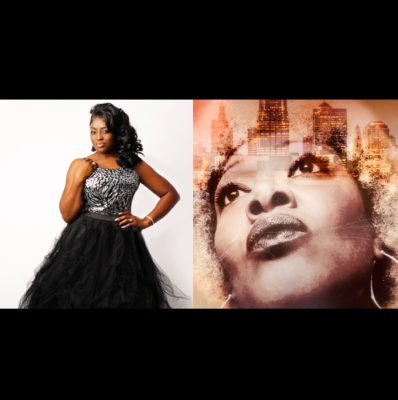 Presented by American Jazz Museum at The Blue Room

Delynia Jannell
Delynia Brown is a native of Kansas City, Kansas. Born into a musical family, she began singing at the early age of 2 at her church, where her father, the late Elder James C. Bailey, pastored and her mother Janet V. Bailey, was First lady for over 20 years. Early on, her parents saw her gift and talent for singing; they encouraged and supported her in many of her singing endeavors.
At the age of eleven she joined J.T. Productions, which allowed her to travel with a youth choir across the country singing and performing in numerous gospel plays. There she experienced her first official stage, giving her exposure outside of her local church. This was the first of many opportunities in her career.
Delynia is an active worker in her church where she serves on the praise & worship team, youth worship helper and mass choir. These roles have helped cultivate and foster not only her passion for singing but for serving God and people alike.
As a vocalist, recording artist and songwriter Delynia has been blessed to share her musical talents throughout this City, within our Nation, and Internationally. In 1999 she sung background for Shania Twain in her Kansas City Tour on “God Bless the Child.” In 2000, she was the featured soloist in “This Little Light of Mine” at Carnegie Hall in New York, and travelled to London, England with the Washburn University Choir. In 2006, she released her first contemporary Gospel debut album titled “I Give My All.” Other accomplishments include her working with national recording artists Krizz Kaliko, TechN9ne, Stevie Stone, E-40 and Kyla Jade. She was a featured artist in the 2017 Kansas City Jazz and Heritage Festival and recently joined the Philip Collins Experience 2019 Tour.
J Love
Jamie (J Love) Chase was born and raised Jamie Roland Pulliam in a small town in Southeast Missouri called Kennett.  Kennett is also the hometown of music artist, Sheryl Crow.
J Love’s early inspirations were her mother, grandfather grandmother, and her best friend.  They were the first people in her life to encourage her to sing.  It was through J Love’s late grandfather, Lelon Pulliam who was also a Deacon, and a singer, and was sought after in the 60’s by The Legendary “Mighty Clouds Of Joy” that she developed a passion for music. J Love has always had the support of her family and friends throughout her musical career.
J Love has become one of leading soul vocalists in the Kansas City area.  Her voice could only be described as earthy, and confident. Not only does J Love front her own band called “The J.Love Band” but has also had success as a solo performer throughout the Kansas City area as well as performing at concerts, and festivals throughout the country.  Her debut CD, “Life’s Side Effects” has been very well received, as well as her new single release in 2019 titled “Unbothered” sold and played on all online platforms!

Tickets cost $10. For more information about performances in The Blue Room, visit americanjazzmuseum.org/blueroom