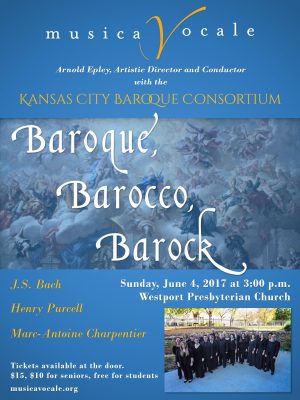 A celebration of baroque masters from Germany, England, and France: Cantata 104 Du Hirte Israel, höre from JS Bach, My heart is inditing by Henry Purcell, and Marc-Antoine Charpentier’s glorious Te Deum. Musica Vocale is joined by soloists and the Kansas City Baroque Consortium.

Musica Vocale is an ensemble made up of highly skilled choral musicians that performs choral literature, often accompanied by orchestra, that is not often performed in the greater Kansas City Metropolitan Area. This volunteer ensemble is comprised of veteran members of the region’s musical community. Most of the choral artists bring extensive experience as music educators and performers, and are engaged throughout the region as soloists and conductors.

In 2009 Arnold Epley formed Musica Vocale, a chamber choir of thirty-two singers and orchestra, which could also present itself as a smaller ensemble appropriate for early music or an expanded oratorio-sized chorus of sixty for larger works.

Arnold Epley is Emeritus Professor of Music and Director of Choral Studies at William Jewell College.  During his 27 year tenure, he led the William Jewell Choir in 26 American concert tours and to England and Scotland nine times, the last in 2009.  He began one of the region’s most anticipated Christmas events, The City Come Again, an annual standing-room-only noonday service at Grace and Holy Trinity Cathedral, with college president Gordon Kingsley.  His students from William Jewell College, Louisiana College, Kentucky Southern College and the University of Louisville have distinguished themselves around the country as university and college professors, secondary and elementary school choral teachers, church musicians, voice teachers, choral singers, and as professional singers and conductors.​

For its five seasons Dr. Epley was conductor of Chorale Francis Poulenc, a chamber choir of singers from many of Kansas City’s best choral ensembles dedicated to the performance of Poulenc’s difficult and rewarding choral works.

For five years he joined the Independence Messiah Choir as resident conductor to prepare the choir for their annual performances of Handel’s Messiah, concluding with his appearance as conductor of their 89th annual presentation.  During this time the Kansas City Symphony joined with the Messiah Choir as co-sponsor, involving both the Symphony Chorus and the Kansas City Symphony.

Dr. Epley’s peers honored him with the Luther T. Spayde Award, the Missouri Choral Directors Association’s highest honor, in 1997.  He received the Carl F. Willard Distinguished Teaching Award and was elected Professor of the Year in 1999.

After a long career as a baritone soloist for symphonic, oratorio and recital performances, especially focusing on the choral works of J. S. Bach, he continues his work as a teacher of singing, his studio made up of some of the area’s leading singers.

Tickets are available online at online or at the door.