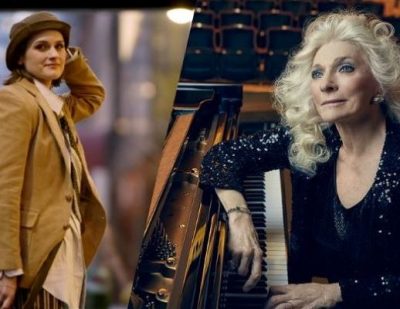 Sunday, May 22 at 8 p.m. | Yardley Hall | Folk and jazz icons share the stage for an unforgettable evening.

Judy Collins inspires audiences with sublime vocals, bold songwriting, personal triumphs and a firm commitment to social activism. In the 1960s, she evoked both the idealism and steely determination of a generation united against social and environmental injustices. Five decades later, Collins continues to thrive in the music industry and to shine brightly with her iconic 55-album body of work.
At 16, Madeleine Peyroux joined the Lost Wandering Blues and Jazz Band, with whom she toured the streets of Europe, discovering the music of Bessie Smith and Billie Holiday. Peyroux’s unique talents were spotted by Atlantic Records, and in 1996 her breakthrough album, “Dreamland,” was released. The album cemented Peyroux as a musical talent who was here to stay. In 2003, she signed with Rounder Records to begin a lifelong collaboration with Grammy-winning producer Larry Klein. Thirty years after her formative days in Paris, Peyroux has nine albums and is an accomplished performer with sell-out tours worldwide under her belt.
Supported in part by Peter Goulet.