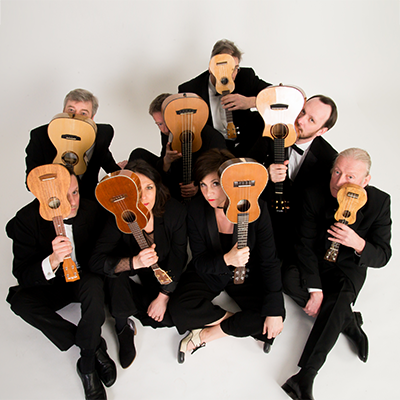 When the Ukulele Orchestra of Great Britain began in 1985, public opinion was that an orchestra consisting entirely of ukuleles in different sizes was a strange concept. But this was something that attracted the founders, who had experience with many kinds of music and yet, had become tired of the conventions of the music business world, as well as the conventions of performance and genre stereotyping prevalent at that time. The idea was to make something fresh and entertaining, both modern and old-fashioned, in a style which deviated from the current performance fashion. People liked the result.
Today, the Orchestra finds that wherever they go, people are now playing ukuleles, often in groups. Many of these enthusiasts tell the orchestra they were inspired to play after seeing and hearing the original Ukulele Orchestra. Now there are many ukulele orchestras, some acknowledging the pioneering work of the UOGB, others claiming ignorance of this rich history, but none of them existed before this, the original Ukulele Orchestra.