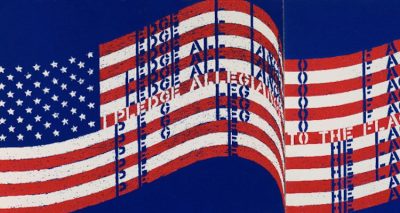 The Artspace reopens its Studio Gallery upstairs with Selections from the Collection: (Un) Wavering Ideals, featuring works from the KCAI teaching collection in conversation with works by Kansas City-based artists. Organized by the Artspace’s Jesse Howard Fellow Hùng Lê (’22 Fiber), (Un) Wavering Ideals features artists whose works question and critique various facets of American society to understand and uncover the ideals upon which America was built.

Utilizing various techniques including printmaking, painting, and sewing, these artists investigate themes of identity, nationalism, immigration, gender, race, and citizenship within an increasingly polarizing political environment. Through their works, these artists raise questions about what it means to be American, for whom this country was built, and what America will stand for going forward.