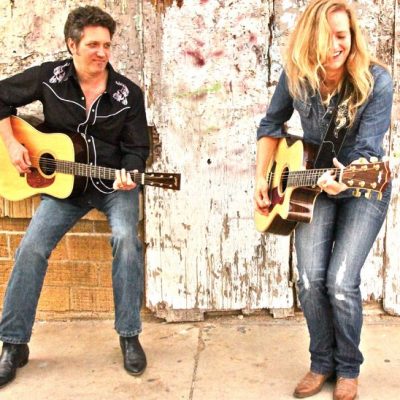 Drivin' Up from Austin: The Flyin' A's

The Flyin’ A’s songs embrace Americana, folk and country — with a Texas twang! The latest CD by this husband-and-wife duo, “You Drive Me Crazy,” was nominated for a Grammy as “Best Americana Album.”

The Grammy-nominated CD, You Drive Me Crazy, is a collection of diverse, heartfelt songs that borrows from Americana, folk, country and Texas music influences. From the rockabilly ear candy of the opening number, “Little Miss Tumbleweed” to the mournful lament of the final song, “Wild Texas Wind,” Hilary and Stuart Adamson mine an array of melody and emotion that form a testament of endurance through the ups and downs life brings. “The songs all have a backbone built on the experiences we’ve faced on both sides of the fence,” Hilary says. To which Stuart adds, “Our music is not just something we create, it’s what we live and breath. Our songs are what get us through the highs and lows that come along with living life to it’s fullest.”

The Flyin’ A’s gained some notoriety after the release of their 2011 album. When they attempted to register the Flyin’ A’s logo and name, it was disputed by the Oakland A’s baseball team. The Adamsons refused to give up the name, which paid homage to the Adamson family ranch in Anson, Texas, where the name and the brand were registered in the early 1900s. The Flyin’ A’s stayed strong throughout the legal battle. Against all odds, winning the right to stay true to their convictions, they are proud to say they fought the good fight against “the big dogs” and won.