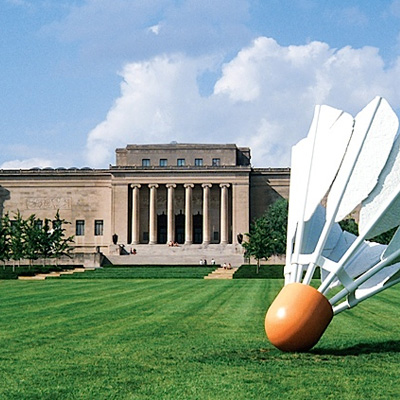 The Nelson-Atkins Museum of Art

The Nelson-Atkins Museum of Art arose from the instincts and ambitions of two private individuals who shared the dream of providing a public art museum for Kansas City and the surrounding region.

William Rockhill Nelson, founder of The Kansas City Star, was convinced that for a city to be truly civilized, art and culture were necessities. When he died in 1915, the bulk of his estate was used to establish the William Rockhill Nelson Trust for the purchase of works of art “which will contribute to the delectation and enjoyment of the public generally.”

Kansas City school teacher Mary McAfee Atkins had similar aspirations for her city. Although relatively unknown, she provided the city with approximately one-third of her million-dollar estate to purchase the land for a public art museum.

The Nelson estate was combined with Mary Atkins’ legacy to build an art museum for the people of Kansas City. The William Rockhill Nelson Gallery of Art and the Mary Atkins Museum of Fine Arts opened to the public on Dec. 11, 1933.

On June 9, 2007, the Nelson-Atkins unveiled the Bloch Building, an addition designed by Steven Holl Architects, which increased gallery and storage space for the growing collection.

Today, the Nelson-Atkins maintains collections of more than 35,000 works of art and welcomes 500,000 visitors a year.