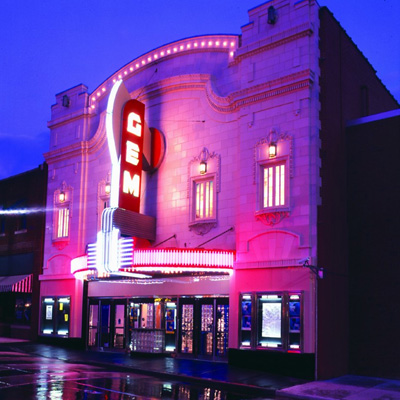 Originally named the Star Theater, the Gem was built in 1912 by the Shriner and Powellson Amusement Company as a silent movie palace serving Kansas City’s African American population. It was renamed the Gem in 1913, and by the time motion pictures could talk in 1929, it had become an established fixture on 18th Street.

Unfortunately, its years as a movie theatre ended in 1960 and by the 1980s, it had faded into a shadow of its former glory. However, when Mayor Richard Berkley and then City Councilman Emanuel Cleaver spearheaded the revitalization of 18th & Vine in the 1980s, the Gem Theater became a centerpiece of the district’s renovation efforts. As a result of the vision and perseverance of Kansas City’s civic leaders, the Gem was restored into a beautiful, state-of-the art performance venue. It stands today as one of the crown jewels of the 18th & Vine corridor.

Behind the restored 1912 façade is a modern 500-seat performing arts center, complete with state-of-the-art technology and equipment. In addition to our annual “Jazz at the Gem” jazz masters’ concert series, the theater hosts many community events and theatre productions. Space is also available for meetings, workshops and seminars.