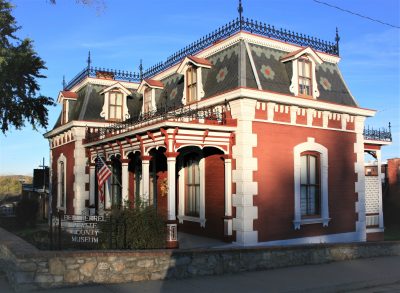 The Ben Ferrel Platte County Museum is an historic house museum (also known as the Krause Mini Mansion), in Platte City, Missouri. It is located only a few blocks from Main Street and nine miles north of KCI via 1-29.

This 1882-built mini mansion’s exterior is brick with limestone corner quoins, a mansard roof and ornate grill work.  Frederick Krause, the builder, found inspiration for these features after visiting the Governor’s mansion in Jefferson City in the 1870s.  The interior is restored and furnished to period.

The museum season runs from late April through early October with a Christmas open house that coincides with Platte City’s lighting festival in November.  The Platte County Historical Society operates the museum to include a genealogical and research area in the basement.