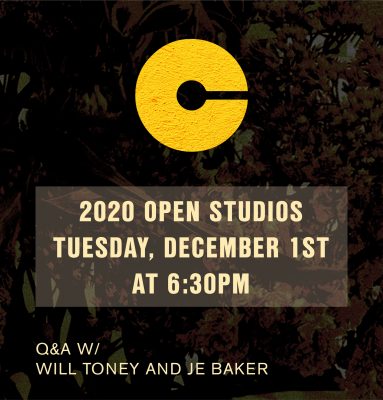 Originally scheduled for April 2020, Charlotte Street Foundation’s Open Studios series is back as an online-only program series! Featuring over 15 studio residents of all practices from dance to painting, this Zoom series provides insight and reflection on how Charlotte Street Studio Residents have reacted (or not reacted) to the critical year of 2020. The second edition of 2020 Open Studios features a new program titled “One-Liners” between studio residents William Toney and JE Baker. This

Originally scheduled for April 2020, Charlotte Street Foundation’s Open Studios series is back as an online-only program series! Featuring over 15 studio residents of all practices from dance to painting, this Zoom series provides insight and reflection on how Charlotte Street Studio Residents have reacted (or not reacted) to the critical year of 2020. The second edition of 2020 Open Studios features a new program titled “One-Liners” between studio residents William Toney and JE Baker. This episode will also debut an experimental electronic performance from studio resident Kota Hayden. The program streams live over Zoom on Tuesday, December 1st at 6:30 PM. Attendees will receive a Zoom link upon RSVP confirmation.

About William Toney (@willarthou on Instagram) I use photography and mixed media to document and abstract signifiers of a neighborhood in transition, and which side of these conflicts artist themselves are existing within. I sometimes create still lifes out of personal objects, objects I find in the street, retired flowers I acquire from work, my old clothes, etc. My work raises everyday materials often discarded and overlooked in a hierarchical lens. Using the language of advertisement as a way to reclaim detritus as the iconography of a contemporary urban experience. An exploded tire found on the side of the road hangs confidently on a wall and seems to mimic an African tribal mask. While a crushed Newport cigarette package has been scanned, enlarged, printed, and framed using the same materials companies use to advertise the products themselves. My work explores issues of representation and value.

About JE Baker (@fourletter on Instagram) Like so many people, I learned the art of care-taking from my mom. She was a doting mother when I was young, and she imagined creative and sometimes secret ways to care for me as I grew older, when caring for me in plain view became a treacherous activity. I was a teenager when she told me that she thought my calling in life was to help people die—a weird thing to say to a fifteen-year-old girl. Being in the company of the dying has never been an uncomfortable space for me, maybe because I was the daughter of a veterinarian, maybe because I grew up on a farm where I consistently had to care for creatures dying both peacefully and violently, and maybe that is also why every day I feel the weight of choosing to live. Now, of course, I know that my mother was merely foretelling our future, that only five years after she revealed my proposed destiny, I would move all my things into storage and sleep on a couch for six months next to the hospital bed in my childhood home to act as her primary caretaker—making food for her, watching rodeos and HGTV, listening to Little Earthquakes, massaging her temples, bathing her, and helping her die. When I found out I was pregnant, the only indication that I could take care of a baby was that I had cared for her in this way. My son was born exactly one year, one month, one week, one day, and one hour from the moment she died while I was sitting next to her. Learning to caretake from my mother meant that I also learned her style of care-taking: self-sacrifice to the point of literal annihilation. I risked demonstrating her example as I earned dual undergraduate degrees and a master’s degree as a single mother. After all these years, choosing to live has never become an easier task, but understanding that I don’t have to die so that someone else can live finally has. I choose to live my life in ways that never seemed possible to my mother because the best way to honor her sacrifice is my adamant refusal to emulate it. With these experiences in mind and in body, I feel called to help people live their best lives as an act of care. I perform this calling as an artist, teacher, community organizer, and curator (“curate” being derived from the Latin Cura, or “care”), creating experiences that are durational, unfold in space, and encourage transformational encounters.

About Kota Hayden (@kotahayton on Instagram) I am a composer, performer of voice and electronics, and sound artist. In any role I fill, my goal is create art that is engaging and uncompromising of my personal voice. To achieve this, I enjoy making interdisciplinary art that engages multiple senses leading to frequent collaboration with video artists, choreographers, poets, and more. I also aim to present art in ways that make it more accessible, still with no loss of personal voice. Collaboration and interdisciplinary arts give viewers more opportunities to grasp onto and find something meaningful to them. I try to present my art in contexts of socialization and interaction rather than conventional recitals to create a more welcoming environment that allows freedom in how to experience the art. What I create is inspired by the human experience and my exploration through it.   About Charlotte Street Foundation’s Studio Residency Program In its seventeenth year, the Studio Residency Program provides free studio and rehearsal spaces to exceptional young, emerging, and/or already accomplished artists in need of workspace in which to create and to develop their creative processes, professional practices, and peer networks. Through the program’s offerings—which include studio space, monthly meetings, presentations, studio visits, mentorships, public programs, exhibitions, and access to a multidisciplinary network of artist peers—Charlotte Street’s Studio Residency Program encourages creative production, artistic experimentation and collaboration, professional development, and community building.

The event is free and open the public. The program will be broadcast LIVE over Zoom and Facebook Live. 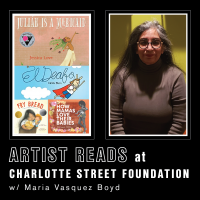